skip to main | skip to sidebar

Last night in the apartment in Otavalo:
Rosie: I’m excited to be going home, but I think I’ll miss everybody here, cuz they have corner stores and stuff. I think I’ll miss Ecuador a little bit because the people are so friendly and cheerful. Worst thing: first day of school. Best thing: learning Spanish

Althea: I’m excited to be going to home to see everybody and to talk to people, but I really like it here because everyone is so friendly. I think this is a really good place to live. I’m kind of glad this trip is over; it’s been kind of like standing in the way of planning. Everything is kind of wide open right now.The worst thing was the first day of school; the most horrible thing in the world (At the end of the day, I didn’t even know we had had math class!)

Paul: Wow. I think the dominant feeling is that my pompoms are very tired. I feel the kids’ loneliness very strongly and I try to cheer them on. Oh boy will it be nice for them to have some other folks to be with and talk to. A truckload of great memories and fantastic moments and projects and experiences, and plenty of hard dang work. Looking forward to sifting through it all stateside.

Just had an exhilarating day driving around the valley distributing our possessions to friends, many of whom helped us do so. Like a community workday of emptying an apartment. Hugs to all. Signing off, home Wed. P
Posted by Paul and Kristen at 12:45 PM 40 comments: 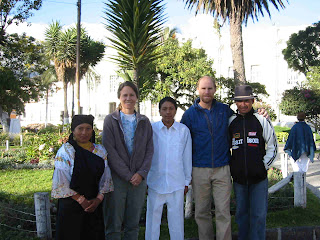 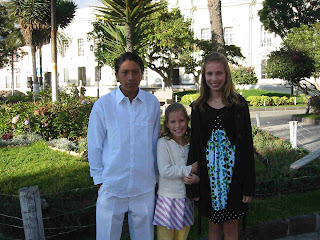 Our first kichwa blog post. Just before catching the bus to Quito for World Cup, KD and I were honored to be godparents at the confirmation of our friends' (Julio and Maria) son. Padrino in Spanish, Achitaita and Achimama in Kichwa (which they primarily speak). Catholic mass, the whole deal. Super cool thing to get to see, can't wait for Sunday: we've been invited to eat cuy (guinea pig) at their home, we plan to arrive with briefcase/shoulder bag for son Jefferson and our refrigerator for mom and dad. Fun!
Posted by Paul and Kristen at 11:34 AM 1 comment: 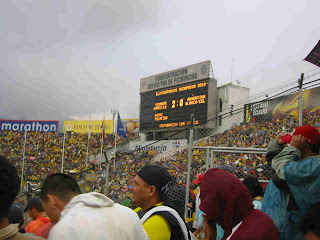 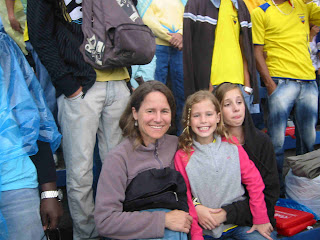 Well, quite a day yesterday. We arose at 5:30 to go be "confirmation godparents" for a friend's 15 year-old, caught an 8:30 bus to Quito, enjoyed lunch with friends - and then braved steady rain to watch Ecuador beat Argentina in World Cup soccer! Only the 3 tiny Guyana countries don't field teams, so 10 teams from South America are in heated competition for the 5 invites to South Africa next year. And since it's a given that Brasil will get one, it's 9 for 4.

We stomped on them. I took my iPod recorder in and captured a bunch of songs and chants. I missed when we 40,000 were calling the bad ref a "son of a prostitute," and when we all chanted "Cry, Maradona, Cry," taunting the legendary Argentine player and now coach, but I caught plenty for a multimedia presentation.

The girls loved it, I'm so pleased and proud. South American World Cup soccer is on the Die Happy list, and we've done it!! Hooray!

Althea:
I loved the soccer so much! I didn't like the rain very much, but we had some plastic, so we stayed dry (mostly). I thought that the enthusiasm from the audience was the funnest. They all had songs that they sang, and chants for the refs when they 'did something wrong'. It's a lot better than watching it on TV, that's for sure! If Ecuador makes it to South Africa, I'll do anything to watch it! Now that we've been to a big sporting event down here, I think I'm ready to go home. I'm definatley going to miss all the friends we made down here, but I think that it will be nice to be home with all the American stuff and people. I really don't want to forget my Spanish, so I'll practice anytime I get.
C U Soon!

Rosie:
I thought the soccer yrsterday was awesome for two reasons. It was a once in a life time expirence and because WE WON!!!!! When we made the second goal that won the game people were screaming and hugging each other like they just won became the president of the united states! it was crazy and it was so so so fun. When we were walking home some gils were standing on there roof and the were screaming ECUADOR, ECUADOR. I loved it. I will never forget that soccer game or this experience in Ecuador. But i am so excited to get home and see everybody and everything.
See you soon,
Rosie
Posted by Paul and Kristen at 6:01 AM 2 comments:

Well, it's coming right down to it. We fly from Quito June 17 and have half a week of winding down to do up here, so the days are few. Thanks all for reading and commenting, looking forward to seeing the US of A and many of you very soon. Great opportunity, many wonderful and difficult times, super glad we did it.

Oh dear, our longest absence from the blog, I think. All fine, just very mobile and somewhat remote. Not much Wifi in our lives.

Returned from Machu to Cusco, left Peru, arrived The Islands early last week. 5 days on a luxury boat racing to keep up with downloading all the pictures. Stunning, spectacular wildlife, just what I'd pondered it might be. Wow, what a place! A crucible and a cathedral at once; more on that someday soon. Hundreds of pictures from lots of different islands and bays. Rosie saw her first sea turtle yesterday, Al (and K and I) our first shark. Iguanas, cormorant, flamingo, penguin, boobie, rays, friggin' remarkable.

On San Cristobal island, back to Santa Cruz in the morning. Back to Otavalo May 30.

The hardcore way to arrive at Machu Picchu is to hike 4 days along the ancient walking route of the Incas; it seems like an awesome idea. Our personal semi-heroic trail to the monument consisted of managing children, keeping up the strawberry yogurt supply, locating lodging in skanky villages and busy cities, you parents get the idea. We made it up there yesterday, and it was stunning. No sunrise due to foggy am, but rounding the corner of a stone pathway and seeing the whole complex emerging from the dawn mist – tears in my eyes. Pick the most stunning Andean col, then apply formidable engineering and artistic vision. On some levels, I’m a fan of those Inca folks.

Today we’re back down towards civilization in a little village that has been continuously occupied since the 1200’s. It’s a bit touristed these days, but I had a lovely couple hours hoofing along some hillsides, often walking on paths that showed evidence of ancient terracing from the 1400’s. I found myself pondering a bit about regime change. As I looked down into the valley at the small peasant patches of corn, barley, potatoes, quinoa and stone irrigation channels, I wondered how much it mattered whether the boss in Lima (or Cusco) was Pucaran, or Incan, or Catholic, or Fujimori. In many ways, and we’ve had a lovely opportunity to see some up close, the folks in the villages are still just raising the cattle and the children, planting the crops, gathering the firewood, wearing the hats (I’m deep into the “Hats of the Andes” photojournal). The government always demands some of your harvest or money, sometimes the power struggle rages through your own neighborhood. The Inca ruins are a ton like the Roman ruins 1700 years later. Would they have caught up without transatlantic interference? Bolivar liberated in 1820; does the 300 year interval determine how it is now? Most of the folks in this village, and my friends in Otavalo, are indigenous folks small-farming along. Will the new norm elsewhere start looking more like this?

Someone has estimated at the time of the Catholic invasion, the Incas had 19 years of food stockpiled in stone storehouses. Then a bitter civil war broke out between the two sons of the emperor (Huascar and Atahualpa), which weakened the kingdom significantly for the convenience of Pizarro and the boys. This fascinates me. The Incas had convinced the populace from Chile to Columbia that overproduction, stone hauling, and supporting The Man was vitally important. But it turns out that they were quickly brought down by internal and external strife. Keeping your eye on the ball can lead to other problems; may we all remember the importance of noticing lots of elements of life. The bee will bump up against the window until it falls down tired; the fly will buzz around chaotically and locate the other exit.

Hugs. Thanks for helping me journal. P
Posted by Paul and Kristen at 2:15 PM 1 comment: 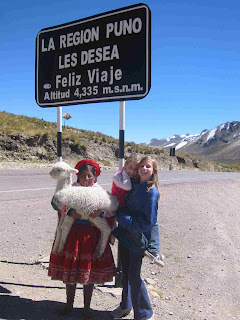 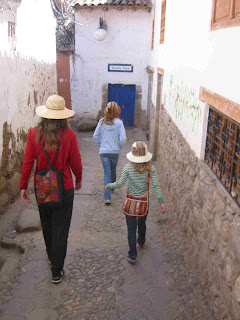 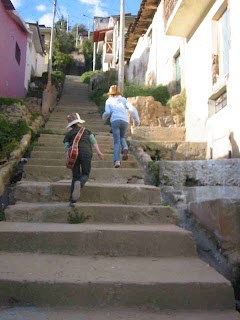 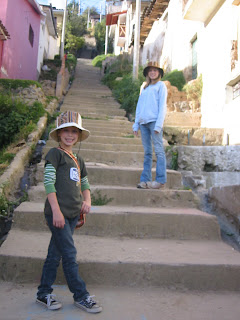 I was excited about a number of stops on our Peru trip, but I had only a vague sense that Cusco was, not in fact the liquor (that’s pisco) but the launching point for Machu Picchu. I’m now a fan! It reminds me of Florence and Kyoto – the sort of place where they’re running a city inside a museum. Not huge like Quito, but tons of beautiful and old architecture. This was the capital of the Inca Empire, and it feels like it. Many of the buildings have Inca walls incorporated into them. And there is lots of the magnificent thing – car-free areas! The narrow narrow streets like Philadelphia and Charleston and lots of Europe. It’s lovely here.

See photos of us crossing the pass from the Titicaca drainage into the Cusco (and Amazon) drainage (a cute baby alpaca and our cute baby gringa) and enjoying the town before heading off to the The Wonder. P
Posted by Paul and Kristen at 2:10 PM No comments: